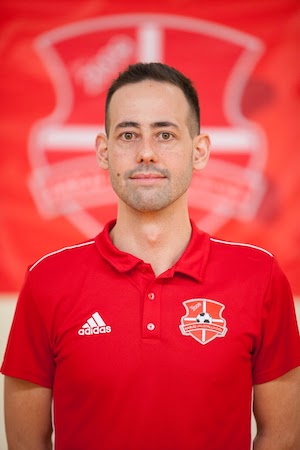 1.How do you feel about living in Estonia during this successful period for our club?

It has been three and a half years since I arrived here. Many things have changed for me during that time. To be honest, I wasn’t expecting such changes, however I feel very grateful for my decision to come to Estonia in 2018.

Estonia is a fantastic country where you feel safe and integrated, people are very friendly and supportive. I really enjoy living here, specially in spring and summer when the weather is warm and there is more light.

The club has also played a very important role in my adaptation to the Estonian culture, providing all the necessary support. I like the way we have been working in order to keep the club growing and how we cooperate with people inside and outside of the club.

One key aspect that made me stay longer in Estonia is the ambition of the club and its dedication to be better year by year. In Harju you feel that you are growing the club and creating the foundations for a brighter future. This is not just about our first team, which has been promoted from 5th to the 2nd division in three years, but also all the approach in first and youth teams of Harju. This has created more and more opportunities for our players to achieve their goals to become a professional football player. 2. How different is Portugal football compared with Estonian? In your opinion what would be the best approach for Estonian football?

There is a big difference between Portugal and Estonia in terms of football. Portugal is strongly connected with football for more than 100 years, our people feel that football is a very important part of their lives, which creates more responsibility and is demanding a lot from everyone who are connected to football. Everything that happens in the football industry in Portugal, for the good and for the bad, matters for Portuguese people. We have also favourable natural conditions which help us to be great in football. For example we have twelve months of good weather and in football it helps to increase the number of hours of practice. In future, the indoor halls will help Estonian football to increase the hours of practice of the players, which will have a big impact in the players’ development. In addition, the Portuguese population is around ten million, which allows us to have a large selection. However, it becomes important only if other aspects mentioned are well developed as well, because there are other countries with higher population, but cannot be as competitive as Portugal or produce continuously players for the main leagues.

In my opinion, Estonia needs to develop its own project to produce continuously good players using the advantages of its context. It is probably easier to convince 50 clubs than 500 clubs, about the priorities of Estonian football and future steps for creating a better development environment for players. Federation can probably support better the clubs and staff creating a faster development compared to bigger countries.

The focus of the clubs and the federation should be the advantages of the Estonian context and maximise it fully by creating its own football development plan. 3.What is your expectation about Esiliiga?

It’s going to be a big challenge for all of us as it will be the first time Harju will participate in this competition. We had the same experience last season when we were competing in Esiliiga B for the first time. There will be an adaptation period where we need to stick together and believe in the process, specially when the pre-season period is not the best due the weather and the spread of Covid-19, which has caused some obstacles in the team preparation.

I would say we have done a very good job in the preparation of the new season. We got our squad on a better level, we signed a couple of new players, and also with the development of our youth players who have been in the club for many years.

The team is even more compromise with our process demanding more from each other, which has created a really competitive training environment.

We do not know where all the improvements will take us in terms of final position in the league, but we do expect that we can show our identity on the field and compete with every team for three points without changing our identity. For us it is clear that the only way we can produce good players is playing a positive game, trying to be dominant and play always with a clear organisation where all the players know what they need to do. That’s our biggest challenge for this season: to be competitive, to be dominant with and without the ball and show a clear identity in every moment of the game. If we are able to do it well, then we are sure we will be in a very good position in the end of the season and our young players will be much better players at the end of the season.

I would like also to encourage and invite our community to join and help us in this new challenge and support our team in the games.